Despite the speculation of slow down, the United States VC Investment industry witnessed USD 136.5 billion at the end of 2019, exceeding the USD 130 billion mark for the second consecutive year.

This is contributed by the robust deal value as well as the deal count; record-breaking VC exit value and an increase in fundraising by VCs in the US.

The increase in deal value was primarily due to the increasing maturity of companies and the rise in early-stage mega deals, which accounted for nearly 25% of the VC mega deals including 53 transactions in 2019. Additionally, the late-stage deal count stood at 2600 and accounted for nearly USD 85 billion of investment in 2019. It also recorded the mega-deals at the late stage with 181 deals completed, an increase of 10% over the previous year.

Despite the dip in exit activity during the second half of the year, 2019 recorded USD 256.4 billion in terms of value and 882 liquidations. 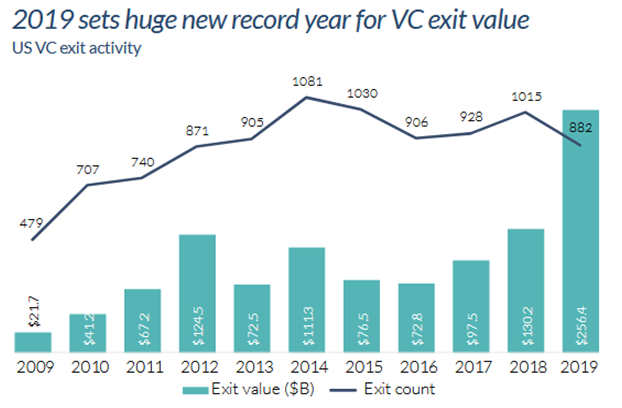 One of the contributions is attributed to the largest exit in the 4Q – The USD 4.0 billion acquisition of Honey Science by PayPal helped in the successful exits of the investors. Additionally, the remarkable record of exit value was primarily driven by the IPO activity in 4Q of 2019. It was majorly dominated by healthcare IPOs registering nine out of 13 VC backed IPOs in 4Q, which accounted for 69.2% of the total IPOs.

In 2019, the funds raised by US VCs stood at USD 46.3 billion in total, which is the second-highest yearly value in the past decade. This was primarily due to the positive net cash flows and increased fund sizes. In spite of the decline in fund count, VC funds registered positive growth in terms of value, as the annual median fund size reached USD 78.5 million in 2019. 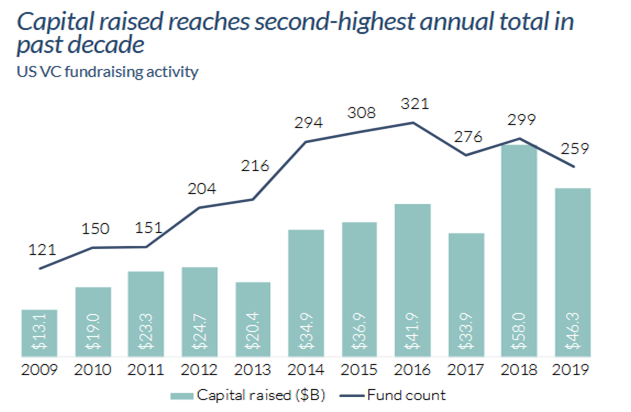 Additionally, there was a remarkable increase in the volume of funds between USD 50 million to USD 250 million, which accounts for 43% of the total fund count in 2019.

In 2019, the US VC funds were interested to expand geographically, while large companies invested in growth companies as a means of outsourcing their R&D and innovation. The country’s VC industry witnessed a healthy appetite amongst the investors and fundraisers for the opportunities in technology. Tech-enabled solutions based on artificial intelligence (AI) and blockchain were the few specific fields, where the VC investors took keen interest. Similarly, life sciences and healthcare technology (Healthtech) attracted VC funding in the US.

However, growth in such a sector is determined by the demographic changes, improved diagnostics and changing regulations. 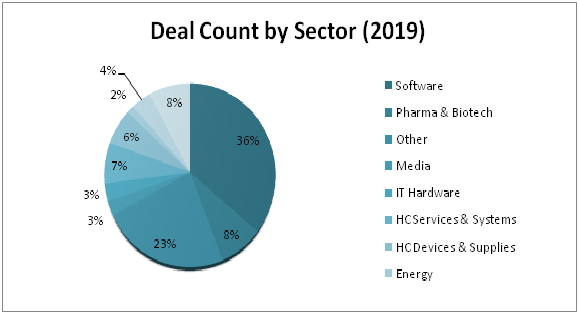 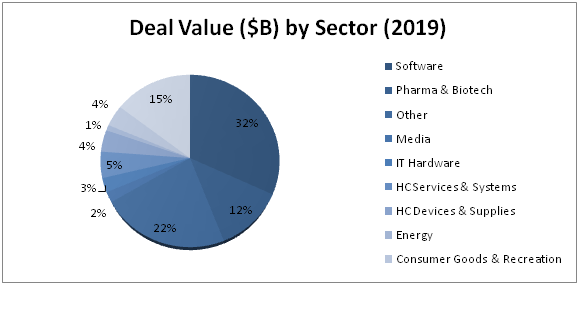 In 2019, Software remained one of the major sectors; however, the sector witnessed a decline in deal count. This was primarily due to mega-deals such as UiPath, for which funds invested in the sector is still on pace to match 2018. 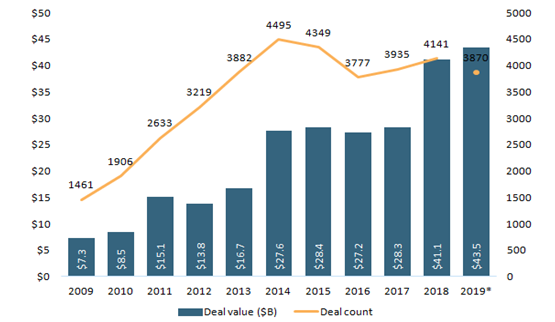 On the contrary, the Healthtech sector witnessed an increase in deal count as well as deal value. This was primarily due to the increase in expensive chronic health issues and a rise in healthcare costs. 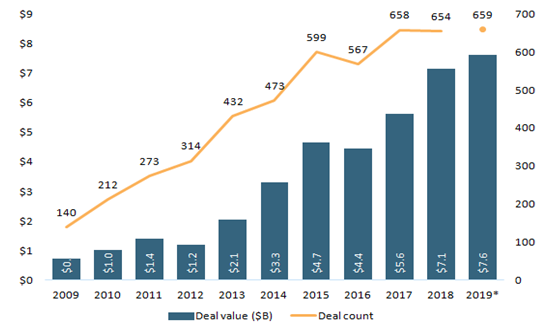 Emerging technologies in Healthtech and cybersecurity

The life sciences or Healthtech sector holds a broad scope for attracting huge VC Investments. While the Healthtech sector is witnessing major advancements in areas such as enhanced surgical devices, digitalized patient data and other clinical IT systems, the VC industry is looking forward to leveraging such opportunities. Similarly, cybersecurity is another booming sector, where much of the VC’s attention is concentrated. An increase in the rate of cyber crimes, high-profile breaches, and risks associated with fraud, money laundering, and terrorist financing have added fuel to the rapid growth in the enhancement of fintech space, payment services, and financial services platforms.

In 2019, nontraditional investors in VC were more well-established than ever within the industry. The yearly value of deals with at least one nontraditional investor exceeded USD 100 billion for the second year in a row. Considering the deal count, the growth over the past few years is attributable to the corporate VC, which nearly accounts for 25% of the total US venture deals over the past four years. It is expected that the deal activity with CVC participation might continue its upward trajectory in 2020.

Investment into Female-founded companies on the rise

2019 was a great year for women in the VC funding industry as investment into female-founder companies has increased slightly as compared to the previous year. Companies with female founders are gaining market share, which accounted for nearly 14% of last year’s exit’s. Although, the percentage seems lean; companies with women as their founders are getting there faster.

Mega-deals on the rise

Mega-deals have taken off at breakneck pace since 2013. Nearly 185 mega deals were signed by 3Q of 2019, setting the pace for a record number of mega-deals. This pushed VC investment to approximately USD 66 billion, which was nearly half of the previous year’s record-breaking amount.

Sonali Patnaik
Sonali Patnaik is absolutely passionate about secondary research and analytics and loves to write on all things digital in her free time.
Previous Post
Comment on RBI Monetary Policy by  Mr. Surendra Hiranandani
Next Post
CORPORATE SOCIAL RESPONSIBILITY: the philanthropic part of the conglomerate

Social Media Marketing Trends to look out for this 2022

Copywriting Do’s And Don’ts for every professional

Become a successful DIGITAL WRITER with these 7 basics

Most Common Types of Content Marketing and Their Benefits 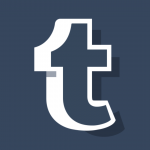