Why is Web Scraping used?

Why is Web Scraping used?

It uses the world wide web directory to access the huge database through hypertext transfer protocol and compare and analyze the desired content. Though it can be done manually too, an automated process is hassle-free, can handle larger data, and provides higher accuracy of results.

Web Scraping is done extensively with the help of Python.

Reason being that Python is superfast for this job. Python has a library called “Beautiful soup” which is required for extracting the data out of the HTML and XML files.

It works with one’s favorite parser to provide idiomatic ways of navigating, searching, and modifying the parse tree. It makes the job much easier and saves time.

“Beautiful soup” can do a variety of things but it has its limitations too. It cannot send a request to the web page. So, the “request” option is used first, and then Beautiful soup can be used for performing the other tasks. Another python module that is used for getting the URLs is Urllib2.

The Process Of Web Scraping

But why is Web Scraping used?

The answer to this lies in the fact that web scraping:-

As there are various processes that come under the umbrella of web scraping where manpower is required to be engaged.

As once the well-planned strategies are executed, they are sure to reap amazing results in terms of company profits as well as in terms of helping the respective company to create a niche in the modern-day competitive market arena.

In most of the cases, the tedious task of  Web Scraping is outsourced to establishments specifically dedicated to this task. This is done, so that the company can focus on the core business operations rather than in the subsidiaries, thus improving the overall productivity. Not only this, having data processed by a dedicated firm ensures timely deliveries and also gives an edge in comparison to those using web scraping tools, which are limited to what and how much they can scrape.

The New Rule Of The Cooperates

In this context, companies such as Data Hen, Octoparse, Bridging Points Media, and PromptCloud are some of the names to place one’s trust with. Their efficient management of data, proper maintenance of databases – big or small, detailed analysis, precise results, and, all over cost, effective services make them very dependable and trustworthy companies to go.

Web scraping, though considered by many, as a grey area, is such an area that despite being cited as illegal proves to be a domain that helps in reaping quite handsome profits. From its very inception, it has grown and expanded its reach and still on a rapid rise in terms of its use by many eminent companies.

It has, thus, become the need of the hour, as a means to boost the growth curve and churn out profits exponentially.

Have you come across any firm that engages in web scraping?

Deepayan Mukherjee
Deepayan Mukherjee is an aspiring content writer by day and a budding researcher by night, who is in a constant attempt to link creativity and technology to achieve the desired results.
Previous Post
BSDU celebrates Skill Carnival
Next Post
How To Go About Choosing The Right SOFTWARE DEVELOPMENT Company 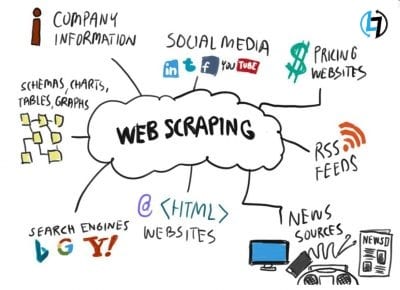 7 of the Best Language Learning Apps and Websites

Online Learning Trends that you need to know in 2021